“They will not start any concession to our people, or any political concession to our Government,” said Foreign Minister Bruno Rodríguez Parrilla in #ConferenceDePress offered on the morning of this September 20, in Havana.

In a dialogue with journalists from #Cuba and other agencies around the world, he announced the draft resolution, “Need to end the economic, commercial and financial blockade imposed by the United States of America against Cuba,” which will be presented to the General Assembly of UN next 6 and 7 November.

He said that the recent expulsion of two diplomats from the permanent mission of Cuba in the United Nations Organization (UN) and the additional restriction of movement that applies to Cuban diplomats is another of the “politically motivated” measures in the conjuncture of the election process in the United States.

Regarding the complex situation that the island is going through, he noted that Cuba will find a way to overcome it, while stressing that the country is better able to face the impact of the measures applied by the US Government, which he described as “unpublished” in the already historical escalation of commercial, economic, financial and media attacks against the island.

He referred to the increasing impact of the damage caused by the blockade, which as an economic, political and financial war has worsened in the last two years, hindering the acquisition of medicines, food and causing increasing difficulties in the import of “raw materials to produce drugs and medications.”

Fuel shortages in the country are the result of such aggression, said Foreign Minister Rodríguez Parrilla, and referred to actions against shipping companies and insurance companies and the sustained increase in measures that hinder the supply of oil from markets in South America, Europe and Africa

He stressed that it is a strategy to provoke, “disappointment, discouragement, hunger, despair and the overthrow of the Government”, but far from achieving it, “reinforce the unity of the people.”

The fact of intentionally cutting off the fuel supply between Venezuela and Cuba is a “gross violation” of international trade regulations and of the navigation law, “said the Cuban Foreign Minister, and stressed that they are tools that” shamelessly ” ”Apply against Cuba ignoring international treaties and laws.

He emphasized that all this isolates the Empire even more, and at the same time wins for Cuba the overwhelming support of the international community that is felt daily, but that is expressed more forcefully in the UN votes, when the majority clamor is heard of the nations of the world: # NoMásBloqueo. 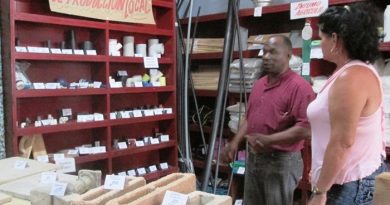 Dream with cement and sand

No one gives up here